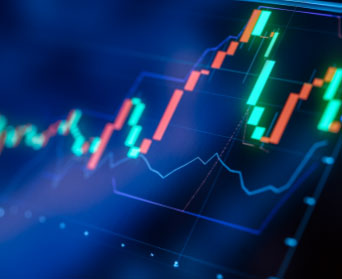 News of Covid-19 vaccines and a decisive US Presidential Election result have contributed to lower volatility as seen in the VIX index. However, a Brexit deal still hangs in the balance and sources of volatility for traders remain.

November saw the strongest performance from the Dow Jones index since 1987 as strong results from vaccine trials and a decisive result in the US election brought some stability after a long year of uncertainty. While overall volatility in the market was down, there was plenty for traders to get their teeth into – from a rotation to ‘value’, to the slide in gold price.

Vaccine news has dominated markets. In November, the Pfizer/BioNTech vaccine was the first to release data, followed swiftly by the Moderna and Astrazeneca/Oxford vaccines. All showed surprising levels of efficacy and promised a real solution to the spread of Covid-19. While distribution will take time, it made further economically damaging lockdowns less likely. Markets rallied in response. In particular, it revived cyclical sectors that had been depressed for some time. The banks, for example, jumped higher with HSBC 51% above its September lows and Barclays 62%. In Europe, there was the added bonus of ECB supervisory board vice-chair Yves Mersch telling the Financial Times that banks would be able to resume payouts early next year if their balance sheets show sufficient resilience. At the same time, news of the vaccines knocked safe havens such as gold as riskier assets start to look more attractive again.

There is scepticism that this represents a long-term revival in fortunes for ‘value’ sectors that have been left behind. After all, the economic impact of the pandemic is still being felt across the globe with many countries still locked down amid a second wave. The vaccine may eventually free economies from the constraints that have been placed on them, but it is not a quick fix.

With the US Presidential Election decided in Joe Biden’s favour, a notable source of volatility ebbed away in November. Amid a slew of lawsuits and public statements, and while still continuing to contest the validity of the election results, Donald Trump appeared to accept that the transition to a Biden/Harris administration must get underway.

Markets welcomed the speedy resolution. The VIX index started to fall with the increased likelihood of Joe Biden’s victory and has remained lower since. While the result was closer than the polls suggested, American democracy appears to have come through its biggest test a little battered but intact.

For many investors, there was the added bonus that the Democrats failed to take overall control of the Senate. This is likely to put a brake on some of Biden’s more ambitious plans to raise tax rates. However, Biden has another shot at the Senate on 5 January, when the Georgia run-off is decided. If Jon Ossoff and Raphael Warnock beat David Perdue and Kelly Loeffler, the Democrats would match the Republicans 50 seats in the Senate, giving Vice President Kamala Harris the deciding vote.

A Democrat sweep of Congress, Senate and Presidency may make markets a little nervous – they would welcome a potentially larger stimulus package, but also fear corporate tax rises. This is a potential source of volatility over the next few months with some suggesting “January could be the new November”.

The third quarter earnings season provided another boost for stock markets. In the US, over 80% of companies beat earnings expectations and around three-quarters beat revenue expectations. This is some way ahead of previous quarters. It showed the pandemic had helped many companies reduce expenses as their workforce stayed home.

While the strongest companies were predictable – Alphabet and Amazon, for example – others weren’t as intuitive. Many of the financial groups turned in a good performance – Goldman Sachs, Capital One, BlackRock and even some consumer groups such as Wayfair, Target and Groupon. This encouraged investors that the impact of the virus may not have been as devasting for corporate profits as expected.

Time is running out for a post-Brexit trade deal between the UK and EU. Progress has been hopelessly slow but may be about to ignite. Boris Johnson’s position looks more precarious now there is an incoming US president who has made it clear there will be no trade deal with the US if the UK compromises the Good Friday Agreement that brought peace to Ireland after decades of conflict.

For traders, there are plenty of areas likely to see significant volatility in the run-up to Christmas – from individual stocks, to commodities such as gold and oil, to indices and currencies. This has been an unpredictable year and this is likely to continue well into 2021.

The Fineco trading platform has everything you need to capture opportunities across 26 global markets and a range of currencies. Pricing is simple, clear and fair while Europe’s most-used trading platform, Powerdesklets you personalise your trading experience.

November saw the strongest performance from the Dow Jones index since 1987: msn.com/en-us/money/markets/trump-warned-that-the-stock-market-would-crash-if-biden-won-the-dow-is-having-its-best-month-since-1987/; The banks jumped higher with HSBC 51% above its September lows: markets.ft.com/data/equities/tearsheet/charts?s=HSBA:LSE and Barclays 62%: wmarkets.ft.com/data/equities/tearsheet/charts?s=BARC:LSE; Yves Mersch telling the Financial Times that banks would be able to resume payouts: ft.com/, marketwatch.com/story/gold-prices-skid-head-for-5-month-low-as-vaccine-news-hits-metal-in-november/; The VIX index started to fall: marketwatch.com/investing/index/VIX; The Democrats would match the Republicans 50 seats in the Senate, giving Vice President Kamala Harris the deciding vote: ft.com/; “January could be the new November”: ft.com/; The third quarter earnings season: schwab.com/resource-center/insights/content/active-trader-market-outlook; Many of the financial groups turned in a good performance: streetinsider.com/beat/