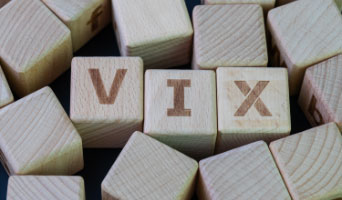 After a reasonably settled few months, factors such as the US Presidential Election, Brexit, technology stock pricing and progress towards a Covid-19 vaccine mean volatility is likely to increase, creating opportunities for traders.

After a peak in March, the VIX index which stands as a proxy for market risk – has settled into a reasonably comfortable pattern, not as low as 2019, but certainly not high by historic standards. Against a backdrop of considerable uncertainty, many investors are worried that market prices don’t properly reflect the risks. The next few months could see this change, however, with several key drivers of volatility.

The US Presidential Election

In the short-term, the US election in November is the most probable source of volatility in markets. The result looks likely to be close, while President Trump is casting doubt on the validity of mail-in votes and has hinted that he may not concede if he is defeated.

This has already been reflected in VIX futures, where traders point to a ‘volatility kink’ around the November vote. This has become more pronounced as President Trump has suggested that he won’t go quietly. This brings to mind the ‘hanging chads’ debacle in 2000 when the closely-fought election between Al Gore and George W Bush came down to a few votes in Florida. The S&P 500 fell 8% during the period of uncertainty while votes were recounted. Eventually the Supreme Court had to intervene.

After an astonishing run of performance, the technology sector has started to stutter in recent weeks. The Nasdaq has dipped from highs of over 12,000 to around 11,000 since early September. In the context of the gains seen from large technology stocks over the past few years, this may not seem significant, but these companies are now a large and dominant part of the index and their weakness influences the wider market.

The main reason for this change is simply the ‘Icarus’ argument – valuations were too high. Earnings have been strong, but the technology sector has seen a meaningful re-rating in the last year. The price to earnings ratio for Apple, for example, has more than doubled over the past 12 months.

There has also been a change of attitude to the wider US markets. The weakness of the Dollar, plus the potential volatility around the election, has weakened the appeal of the US for international asset allocators. As the largest and most liquid stocks in the index, large technology stocks have seen the greatest outflows.

The VIX measures volatility on the S&P 500, so won’t necessarily reflect wobbles around Brexit, but as talks with the EU reach their final stages, there is likely to be considerable volatility in the UK currency and stock market. Sterling has, so far, been the strongest benchmark for Brexit-related volatility, though it has undoubtedly depressed UK equity performance as well.

Even though markets have had time to get used to the prospect, a ‘no deal’ outcome would still alarm many participants. Considerable volatility in Sterling and among FTSE 100 companies is likely in that event.

It seems increasingly likely that the only way out of the pandemic is through a vaccine. As such, markets have become increasingly sensitive to trial developments. Nine potential vaccines are currently going through phase three trials and the consensus appears to be that mid-2021 is the soonest we can expect a vaccine to be widely available. Much will depend on the level of adoption and the degree of protection provided, but any prospect of a return to normality is likely to create positive momentum in the markets.

Volatility in individual stocks may be higher and traders can use contracts for differences. to take advantage. There are also indices measuring the volatility of individual assets, the CBOE Crude Oil Volatility Index for example, which can be traded long or short. Futures and options pricing is also influenced by volatility, while Bollinger Bands measure the extent to which an individual security is moving away from its long-term average and can give early signs of momentum in a particular area.

These are complex and uncertain times which may be difficult to navigate but create price movements. For volatility traders, it is an ideal environment.

With Fineco you are fully equipped to trade volatility. Using Powerdesk, Europe’s most-used trading platform, you have access to 26 global markets and a broad range of instruments – all through one multi-currency account and with transparent, competitive pricing.

his has become more pronounced as President Trump has suggested that he won’t go quietly: ft.com; The S&P 500 fell 8% during the period of uncertainty while votes were recounted: fnlondon.com/articles/ubs-prepare-for-the-most-litigated-election-in-us-history; Eventually the Supreme Court had to intervene: usnews.com/news/the-legacy-of-hanging-chads; The Nasdaq has dipped from highs of over 12,000 to around 11,000 since early September: www.marketwatch.com/investing/; The price to earnings ratio for Apple, for example, has more than doubled over the past 12 months: macrotrends.net/stocks/charts/AAPL/apple/pe-ratio; Technology sector performance can influence global indices: just under one-third of the S&P 500 index is in the technology sector: spglobal.com/spdji/en/indices/equity/sp-500/#overview – Factsheet, S&P500 USD; mid-2021 is the soonest we can expect a vaccine to be widely available: nationalgeographic.com/science/health-and-human-body/human-diseases/coronavirus-vaccine-tracker-how-they-work-latest-developments-cvd/;