HomeNewsroomGold. What influences the market for it and when might you benefit from participating?

Gold. What influences the market for it and when might you benefit from participating? 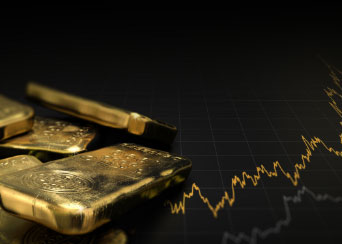 Gold is well known as a ‘safe haven’ asset. But what influences its price over time? Interest rates and inflation, supply and demand and diversification driven central bank buying programmes can be relevant factors?

Investors may be going wild for cryptocurrencies since the start of the year as a hedge against tougher stock markets, but are they forgetting the original alternative currency – gold?

As markets crashed in March on the back of Coronavirus panic, the precious metal dipped as traders sold out to recover losses elsewhere, surprising many. But it has since rallied again. This shows gold can be as unpredictable as many other currencies. Nevertheless, there are a number of clear factors that influence the price.

Backed by a tangible asset

Gold is rare in today’s currency markets in that it is backed by a tangible asset. This is in contrast to fiat currencies, where supply is determined by central banks and governments or cryptocurrencies, where supply is determined by the community. There are times when investors appreciate this certainty; and these tend to be the times when the gold price performs well.

However, is not as simple as gold being the right option for sliding stock markets. Research by BullionVault shows that investing in gold to protect against short-term drops in the stock market is no better than a coin toss. To assume that gold will automatically rise because markets are falling is, as the March experience demonstrates, too simplistic.

In times of uncertainty

That said, the gold price does seem to have some relationship with political uncertainty (which in turn can cause stock market volatility). The Royal Mint saw a spike in sales on Brexit turmoil, for example. Gold bugs like political volatility, government failure, currency debasement – particularly weakness in the US Dollar, which is the world’s reserve currency. It is no coincidence that gold’s strongest moment in recent history was in the wake of the global financial crisis when the global financial system appeared to be at risk.

Those looking to profit from gold's 'insurance' qualities should ensure that everyone hasn't got there first. Just as it is cheaper to buy insurance before crashing a car, it is generally cheaper to buy gold when no-one is forecasting problems. In this way, those looking to create a balanced investment portfolio will hold a little bit of gold at all times rather than buy in as the environment worsens.

Gold also has a relationship with interest rates. Because there is no yield on gold, it will generally do worse when interest rates are high. There is a greater opportunity cost to holding it at a time when investors could be getting, say, 5% in cash than when they are getting 0.1%.

Gold is considered to be a good hedge against inflation. It retains its value at a time when inflation may be devaluing other assets. It also has a relationship with the oil price: the two typically move in tandem, though this only applies around two-thirds of the time. The theory runs that higher oil prices contribute to higher inflation. Higher inflation then pushes up the gold price.

Supply and demand can influence the gold price: supply doesn’t tend to change very much for gold because there aren’t a lot of new discoveries; it rose just 2% in 2019. Demand, in contrast, can fluctuate considerably. There are three main sources of demand – jewellery, ETF and central bank buying. Jewellery demand tends to be seasonal and may not vary significantly from year to year. ETF investment flows can exert a real influence, however, and were a significant factor in shoring up gold demand in 2019.

Central bank buying has been an important factor in recent years as countries have sought to diversify away their reserves away from US government bonds and the Dollar. Central banks bought a record $15.7bn of gold in the first six months of 2019. Demand has been particularly high from Poland, China and Russia.

It’s tough to get a definitive steer on the direction of the gold price, but the key elements to watch will be the US Dollar, global interest rates, geopolitical tensions and inflation trends. Demand from central banks and ETFs will also play a role. Each of these elements may play a more or less important role at different times, but they can help build a picture of the likely performance of the original alternative currency.

Interested in gold? Trade gold futures and invest in gold ETFs through the Fineco platform. Premium trading without premium prices

Investors may be going wild for cryptocurrencies since the start of the year as a hedge against tougher stock markets: news.bitcoin.com/q1-crypto-trade-volume-61-bitcoins-price-trumps-equity-gold-markets/; Research by BullionVault/gold-news; The Royal Mint saw a spike in sales on Brexit turmoil mirror.co.uk/money; Supply and demand can influence the gold price: supply doesn’t tend to change very much for gold because there aren’t a lot of new discoveries; it rose just 2% in 2019: gold.org/goldhub; Central banks bought a record $15.7bn of gold in the first six months of 2019 ft.com/.