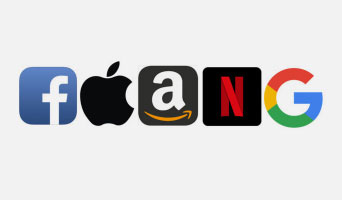 The top global technology stocks dominate markets around the world, with consistently strong performance even during the Coronavirus crisis. There is plenty of potential interest for traders.

It has been an astonishing run for the big global technology stocks. Since the Global Financial Crisis of 2008/9, they have driven stock market growth almost single-handedly. Variously known as the FAANGs, FANGs or FAMGs, alongside a variety of other acronyms, depending on which stocks are included from Facebook, Apple, Amazon, Microsoft, Netflix and Google (Alphabet), they dominate all the major global indices and are among the most widely traded stocks around the world.

Partly this is because these are great businesses changing the way we work, live and shop, but there have also been other factors at play that have driven their strength. In a climate of low interest rates and low economic growth, investors have naturally gravitated to companies with a compelling story, significant cash flows and high revenue growth.

With each round of monetary easing, the large global technology companies have pushed higher. This is because of the "discount rate", the rate used to price future cash flows. If the rate is low, future cash flows become more valuable. As interest rates have fallen and quantitative easing resumed, the discount rate has dropped dramatically – even more so during the Coronavirus crisis. Future earnings have become more valuable. For technology companies, with expected high future earnings, this is a particular benefit.

Lockdowns around the world in response to the Coronavirus pandemic have increased the use of social media and forced us all online. As such, many global technology companies are seeing revenues improve at a time when many other companies are facing real weakness. This has exaggerated the gap between technology and the rest of the market.

The link to passive investing

These stocks have also benefited from the rise of passive index investing. Today, technology forms 27.5% of the S&P 500 index (as of 31 July 2020) and 20.7% of the MSCI World index (as at 4 August 2020). Apple, Microsoft, Amazon, Facebook and Alphabet (owner of Google) comprise the largest five stocks in the MSCI World index and 12% of its weighting. As flows into passive funds have increased – assets in Exchange Traded Funds (ETFs) had topped $6 trillion by the end of 2019 – the market capitalisation of the biggest tech companies has also increased. This has proved self-reinforcing, as strong technology performance pushes up the performance of the indices, encouraging more people to invest.

That said, there has still been plenty of volatility in between. As they have grown, large technology companies have become more controversial, attracted more headlines and drawn the attention of lawmakers. The share price of Facebook, for example, has been buffetted by controversy over its decision to take political advertising, its response to the Black Lives Matter protest and various court battles with international regulators over privacy concerns. This has led to a boycott by some major advertisers, but it hasn’t affected its revenue stream, with the group reporting higher-than-expected revenues and profits in its recent earnings statement.

Today, the large global technology companies may become a political football in the upcoming US Presidential election. Democrat contender Joe Biden has been a vocal critic of technology giants during his campaign, threatening to impose new federal taxes on them. Donald Trump also has a variable history with the technology companies and has periodically threatened to act where he sees they have “monopoly status”. Both have stopped short of calling for the technology companies to be broken up, but anti-trust investigations remain a periodic threat. Traders may be able to play market volatility as opinion polls flip flop in either direction ahead of the election.

As some of the largest stocks in the market, global technology stocks may also be vulnerable to sudden withdrawals of liquidity from markets. At times when investors are exiting the market, they have to sell those stocks where there are still buyers. This can create selling pressure in larger companies. Investors exiting index funds can create additional pressure too. This was seen to some extent in the recent Coronavirus-induced rout, when technology funds led the markets lower.

Technology companies will also be inextricably linked with the fortunes of the US economy and there has been some relative weakness for the major technology stocks as the US has found itself hard-hit financially by the Coronavirus. If global asset allocators decide that they no longer want to invest in the US or lose faith in the ongoing strength of the Dollar, technology stocks will likely suffer.

All this is in addition to the usual trading opportunities around earnings season. Technology companies always attract major trading interest as they announce their results, with investors poring over subscriber levels, forward guidance and revenue growth. They are always newsworthy and seldom dull, providing plenty of excitement for traders.

Interested in trading technology stocks? From direct trading to CFDs, the Fineco platform offers a range of options for trading on technology stock volatility, letting you access 26 global markets with a multicurrency account and competitive pricing.

Technology forms 27.5% of the S&P 500 index (as of 31 July 2020) and 20.7% of the MSCI World index (as at 4 August 2020): MSCI ACWI Index (USD); Apple, Microsoft, Amazon, Facebook and Alphabet (owner of Google) comprise the largest five stocks in the MSCI World index and 12% of its weighting: MSCI ACWI Index (USD); As flows into passive funds have increased – assets in Exchange Traded Funds (ETFs) had topped $6 trillion by the end of 2019: etftrends.com/equity-etf-channel/global-etf-assets-hit-6-trillion-and-still-counting/; This has led to a boycott by some major advertisers, but it hasn’t affected its revenue stream, with the group reporting higher-than-expected revenues and profits in its recent earnings statement: www.cnbc.com/2020/07/30/facebook-fb-earnings-q2-2020.html; Today, the large global technology companies may become a political football in the upcoming US Presidential election. reuters.com/us-usa-election-tech-factbox/factbox-where-do-trump-and-biden-stand-on-tech-policy-issues;