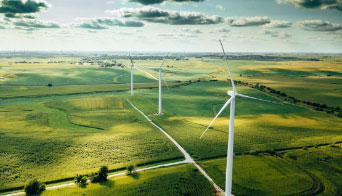 Wind power is playing a key role in the shift to renewable energies. The UK, US and Europe are all working to increase wind capacity, with ambitious targets. While winds stocks are not a new find, there are wind power investment opportunities.

If the world wants to decarbonise, it will need wind power. For global governments to hit their carbon targets wind capacity needs to increase by an estimated 10x by 2050. The technologies are well-established - wind capacity has already increased 75x since 1997 - but the sector needs to innovate to realise its ambitions.

Wind capacity is increasing around the world

The UK government laid out its plans in October 2020, saying it wanted offshore wind to produce more than enough electricity to power every home in the country by 2030. It is relying on the expansion of floating offshore wind, targeting an increase of over 15x the current volumes worldwide.

The UK is not alone. In both 2019 and 2020, more wind power capacity was installed in the US than any other generating technology. This is even true in large oil states - in 2020, Texas had the most wind turbine capacity and generated more electricity from wind than the next three highest states (Iowa, Oklahoma, and Kansas) combined.

The EU has been an early and enthusiastic adopter of wind power. It currently has the largest floating wind energy capacity in the world, for example. At the moment, wind power supplies around 15% of its energy demand and it expects this to increase to around a quarter by 2030.

On 1 October 2020 work began on the largest floating wind turbine plant in the world, Hywind Tampen, at Kværner Stord in Norway. It will help to power five oil and gas platforms, reducing emissions by more than 200,000 tonnes per year, the equivalent of 100,000 private vehicles.

Floating wind turbines are at the vanguard of wind farm development. Onshore wind farms, which are cheaper and relatively easy to install, have been the focus of wind power investment to date. However, they come with capacity constraints – it is difficult to find areas that are sufficiently windy and remote with no concerns about local habitats.

Offshore wind is potentially far more productive and most of the world’s wind resources are located in deep water areas, only accessible to floating rather than fixed turbines. It is also possible to build far larger turbines out to sea. Problems of maintenance have been solved by access to technologies which can highlight problems that need to be fixed. This is likely to drive the next wave of wind capacity.

There have been short-term challenges for the wind energy sector

The wind energy industry supply chain has seen major disruption from Covid-19, particularly in the manufacturing and assembly of wind turbines. Equipment suppliers have been forced to shut production and there remains a significant backlog, which has slowed the arrival of new capacity.

Offshore wind needs to become more cost-competitive with other forms of energy. While PV (photovoltaic – converting light into energy using semi-conductors) and onshore wind are already cost-competitive, the remainder of the wind energy sector needs to build economies of scale. That said, costs have already come down significantly and renewable energy providers can access a lower cost of capital than fossil fuel providers. This is vitally important in bringing new projects on stream.

Wind energy investment is not a new find

Wind energy may be a vital cog in the move to renewable energy sources. However, it is by no means undiscovered by investors. 2020 was a strong year for many wind stocks as investors became increasingly interested in the energy transition. That said, many wind stocks have dropped back in recent months as traditional fossil fuel providers have recovered. The share price for Vestas Wind Systems for example, moved from DKK133 in June 2020 to as high as DKK312 and back down to DKK232 in June 2021. Ørsted saw a similar trajectory, moving from DKK756 to DKK1352 and then back to DKK871 in June 2021. Other companies with significant wind power exposure include Pattern Energy Group, NextEra Energy and General Electric.

There are lots of investment trusts with holdings in wind power, but these tend to offer generalised renewables or sustainability exposure rather than wind energy investment specifically. These include the Renewables Infrastructure Group, Greencoat Renewables and Aquila Renewables Income fund. The Association of Investment Companies reports that Renewable Energy Infrastructure raised the most of any sector in 2019 and 2020 - £1.8bn and £1.3bn respectively. This may suggest a sector that is running a little hot.

Wind ETFs will provide specific, concentrated exposure to companies across all areas of the wind power supply chain. Wind power also uses a number of commodities, notably aluminium and rare earth elements. These will benefit from the growth of wind power and may be another way to access growth in the sector.

For wind power, the investment dilemma is not over its long-term growth – which looks assured – but over the extent to which it has been discovered by the market. Renewable energy is a hot topic and investors may periodically get over-excited about its prospects. Either way, this volatility will present investment opportunities.

The Fineco trading platform equips you with the tools and resources to explore the various investment opportunities available, which you can access online or through the Fineco app for mobile updates and trading.