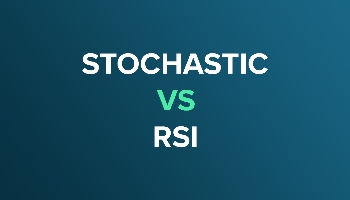 Stochastic indicator vs RSI: which is better for trading?

The Stochastic Oscillator (SO) and the Relative Strength Index (RSI) are both tools that are used in technical analysis for evaluating asset prices and can help to determine whether an asset might be overbought or oversold. Both are also known as “range-bound” indicators, meaning they have a relative value between 0 and 100 which is written as a percentage, and they oscillate between these numbers as the price of the asset changes.

The Stochastic Oscillator (SO)

As a momentum indicator, the concept of the SO is premised on the idea that prices follow trends in trending markets, such that closing prices of assets will be close to the direction of the trend: uptrends closing with highs and downtrends closing with lows.

Therefore, the SO uses the following calculation to attempt to identify future price movements: the difference between the most recent closing price and the lowest price during a given period of time, divided by the difference between the highest and lowest prices during that same period of time, multiplied by 100 to convert it to a percentage between 0 and 100.

How to read the graphic?

The period of time chosen can be changed at will, but the previous 14 trading sessions is usually the default. The Stochastic Oscillator is graphed as a bar graph with one bar being the SO value, and a bar beside it being a three-period (usually 3 trading sessions) moving average of the SO value. It is also often graphed as a line graph to show the changes over time of its own values.

When the SO value moves above the 80% mark or below the 20% mark, this can be a sign that the asset has been overbought or oversold respectively. This may be a temporary move, however, so to try and minimize the occurrence of false positives, the three-period moving average is also consulted. If the moving average also moves into the above ranges, this can be interpreted as a sell signal (if overbought) or a buy signal (if oversold).

Essentially, the index traces the averages of gains and losses throughout a period of time and resolves these averages into a percentage that does not react too sharply towards 0 or 100 except in the case of a trend.

The period of time, like the SO, is usually the default 14 days of trading sessions, though any time period can be used. Like the SO, higher values give a greater probability that the asset is overbought, and lower values that it’s oversold. The key levels are 70% and 30%, interpreted in the same way as the SO on the same type of line graph.

Differences between Stochastic and RSI indicator

One of the key differences between the two trading indicators is the emphasis that the SO has on the closing price.

The RSI, on the other hand, equally represents all trading session highs and lows in order to gauge more fully where the price movement’s momentum is. The RSI also understands the significance of an asset remaining above the 70% or below the 30% mark for extended periods of time, meaning that it is not only the entry into these levels that’s important, but the exiting as well, especially during bullish and bearish trends.

The interpretations that can be gleaned from each indicator are helpful for identifying their uses and the best practices that accompany them.

With the SO, sustained movements into the 80%+ or 20%- range are significant, but this significance is of relative value based on past price movements: both the range of the movements and where the closing price is during each one.

For instance, if an asset’s price keeps hitting lower lows periodically during trading sessions, yet the asset’s closing price stays at or keeps hitting higher lows, the Stochastic Oscillator will exhibit divergence from the bearish trend.

The RSI, however, allows for interpretations that not only deal with movements that enter and/or remain above 70% or below 30%, but also pays attention to swings between these numbers, such as when the index value crosses one of these two levels and then returns, and cannot reach it again before heading toward the opposite extreme. This can be interpreted as a signal of a trend reversal.

Stochastic indicator and RSI: when to use them?

So, which is best, and when? Perhaps a corrective characterization would be helpful. The SO appears to indicate resistance that builds up in both range-bound and trending markets to staying within a range or trend, whereas the RSI appears to indicate larger and more sustained possibilities for reversals and the forcefulness of the potential for bucking trends. Both should be consulted in trending and oscillating or range-bound markets, but investors should be sensitive to their limitations and should pair their use with the use of other technical analysis tools as well as fundamental analysis of the asset itself.

This will reduce attention to false signals while helping investors learn the subtleties of each tool.