HomeNewsroomMACD indicator: how to master it?

MACD indicator: how to master it? 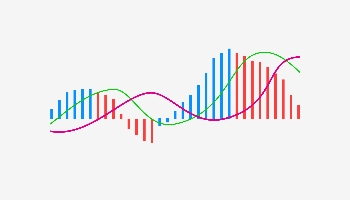 A practical guide about Moving Average Convergenge Divergence (MACD): definition, how to set and how to trade with MACD indicator.

When learning about how technical analysis can help trading strategy, we’ll start with a foundation of simple concepts before moving on to the greater features of the skillset. Before looking at the Moving Average Convergence/Divergence (MACD) indicator, we’ll review some of the fundamental concepts that make up the inner workings of the MACD.

The MACD looks at the relationship between these averages to suggest the direction of future prices. It’s helpful to view these averages as lines on a chart of an asset price’s activity over time.

When only looking at the difference at certain points in time between the 12-day and 26-day moving averages, it might be difficult to tell whether the underlying asset’s price was moving in an upward or a downward trend. However, it would also not be possible to recognise changes in the momentum of the trend. The MACD can show changes in trends long before it becomes apparent to the investor who is only watching bars of price movements on a chart, or even a pair of moving averages.

When watching the MACD, there’s a chart of the price of an asset with the 12-day and 26-day moving averages superimposed over it. Then, below this, the MACD indicator line and signal lines will be over a baseline (also known as a zero line). When the MACD line is highest above or lowest below the baseline, there is the greatest difference between the 12-day and 26-day averages, and the rate of change in the price of the asset is the greatest. When the MACD line crosses the baseline, it means the two moving averages have crossed as well, and if the MACD stays at the baseline, the price of the asset is not changing at all. However, this still does not indicate the price direction, which is where the signal line comes in.

Three ways to use MACD indicator

The most basic indication of a changing trend in price direction is when the 12-day moving average crosses the 26-day moving average or vice-versa. The difficulty here is that the strength of the change is not taken into account, leading to “false positives” regarding whether there is really a sustained change in price direction. The MACD indicator attempts to identify strong trends as they begin to occur. There are several interpretive clues for identifying these trends.

The first is when the MACD indicator line crosses above the signal line. This indicates the possibility of momentum for a price direction upwards. The opposite is also true, when the indicator line dips below the signal line, it can indicate momentum for a price direction downwards. The advantage of these crossover signals is that they often precede the mere moving average signals, allowing traders to take advantage of an entry or exit point before the sustained price movement takes effect.

The implications of this also mean that when the MACD is oscillating below the zero line, buying opportunities are still riskier even if the MACD is trending upwards since there is still overall downward price pressure on the asset.

The concept of “divergence” is also quite important for the MACD. Divergence occurs when the MACD line goes in the opposite direction of the price. One example of this is when the price of an asset hits a low, then a lower low, while the MACD hits a low, then a higher low. If the longer-term trend is bullish, this is a bullish signal. Conversely, if an asset hits a high, then a higher high, while the MACD hits a high, then a lower high, if the longer-term trend is bearish, then this is a bearish signal.

MACD and others technical indicators

Like all technical indicators, the MACD works best as a reliable indicator when used in tandem with other technical indicators like the Relative Strength Index (RSI) and the Percentage Price Oscillator (PPO). It should not be thought of as providing certainty, only probability. It also works well with assets that trade via trends and do not experience sudden, drastic price movements. If an asset has recently experienced a price shock, the MACD will not be reliable in evaluating future price direction.