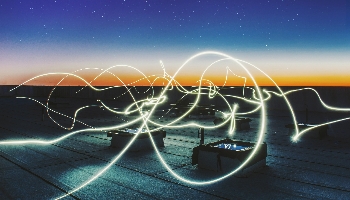 Energy markets power the world, but they are experiencing serious turmoil and are currently subject to significant change. Against this backdrop, we examine the options – and opportunities – open to investors.

What are energy markets?

Energy markets in finance are regulated markets around the world on which energy sources such as oil, gas and electricity are traded.

Energy markets have been frenetic since the start of the year, with prices for oil, gas and renewables rising rapidly. This is being felt in economic growth as households are forced to divert spending to pay fuel bills. It is also being seen in record profits for energy producers. So are there opportunities for investors in rising energy market prices?

The current turmoil in energy markets is attributable to an extraordinary sequence of events. The pandemic saw demand for energy slump as people were confined to their homes and transport systems were grounded. The oil price slumped as low as $23 a barrel. However, as economies reopened, demand surged.

Supply chain problems, isolated lockdowns and poor planning meant supply didn’t come on stream as fast as it was needed. The war in Ukraine further dented supply, with Russia and Ukraine major contributors to the world’s energy mix. In 2021, Russian oil output reached 10.5 million barrels per day, making up 14% of the world’s total supply. It exported 4.7 million barrels per day, predominantly to Europe. Russian natural gas accounted for almost 40% of European Union gas demand in 2021. Sanctions against Russia have put a significant dent in global supply.

This is all set against the backdrop of the transition to a renewable energy market whereby the world needs to wean itself off fossil fuels to halt global warming. The necessity of moving to alternative ‘clean’ sources of fuel was already distorting the market. Governments had started to put significant investment into renewables infrastructure. The need for energy security in the face of Russian aggression has accelerated this process.

How are prices moving in the energy markets?

Price rises in the electricity market, gas market, and beyond have been extraordinary. Natural gas has risen 182% year on year, coal is up 213%, while Brent Crude oil is up 70%. The energy companies have made huge profits on the back of these rises. Shell reported earnings of $9.1bn in the first three months of 2022 alone, almost three times its revenues from a year earlier. However, they have also been subject to windfall taxes, as governments have looked for ways to ease the burden for households.

Price rises appeared to be stabilising in late April and early May but have recently edged higher once again. The expectation is that they will remain high while the Ukraine crisis is unresolved. As yet, there is no sign of any de-escalation in the conflict and many are predicting it could endure for years.

How is this volatility affecting the renewable energy market?

The high prices for fossil fuels have had a knock-on effect for the renewable energy market, as governments try to create energy security using alternative energy sources such as wind and solar. As it stands, much of the energy infrastructure has been built to transport fossil fuels long distance and will need to be reconfigured and digitised. These sectors are likely to see considerable investment over the next few years.

In the longer-term, demand for fossil fuels will wane as renewable energy comes on stream. However, it will take time to make the necessary infrastructure changes and fossil fuel demand is likely to remain in place for many years. In the meantime, the transition could bring considerable volatility of pricing, which may bring opportunities for traders.

How can investors access energy trading and related investment options?

There is a vast array of options for investing in energy markets. Investors can trade in the commodity markets directly, trading oil, gas, coal or the associated futures markets. On the Fineco platform, it is possible to trade contracts for difference (CFDs) on all the major commodities markets. There are also a range of metals associated with building the infrastructure for the energy transition, including lithium and copper.

Alternatively, investors can buy energy companies directly, either traditional fossil fuel companies such as BP or Shell or renewable energy market groups such as Orsted or Vestas. Increasingly, many of the fossil fuel companies are making significant investments in renewables. BP has a major holding in the UK’s electric charging infrastructure, for example.

Active managers should be able to look at energy pricing and shape a diversified portfolio. The BlackRock Energy & Resources and Riverstone Energy investment trusts aim to straddle the energy transition, investing in both the traditional and the renewable energy market. Guinness has energy and sustainable energy funds, while JP Morgan Asset Management has several natural resources funds.

Energy markets are exciting and diverse. They are the engine on which the world runs, and they are currently subject to significant change. They are undoubtedly volatile, and many factors will influence energy prices, but they offer a broad spectrum of opportunities for investors.

You can access thousands of investments across funds and directly traded instruments with no hidden fees on the Fineco Platform.