HomeNewsroomIs the party over for Big Tech?

Is the party over for Big Tech? 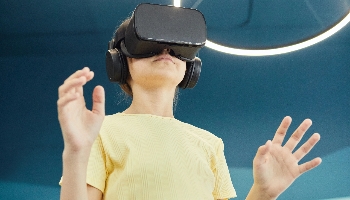 Big tech has enjoyed a decade of near-uninterrupted growth – then along came 2022. But an end to its extraordinary run may spell opportunities for investors. Here we break down developments in the tech sector and outline routes in for investors.

Big tech has been the investment of the decade and is now a cornerstone of many indices and portfolios. But is that dynamic under threat? It has been a dismal start to the year for some of the world’s big tech companies as earnings have slowed and their high valuations have been called into question. Is the future as bright for the glory sector of the 2010s?

Technology has seen an extraordinary run since the Global Financial Crisis

The technology-focused Nasdaq index was up 360% over the past 10 years to June, with individual names, such as Amazon and Tesla, delivering even stronger performance. In June the Amazon share price was up around 12x since 2012. Tesla shares were just $6 in 2010; as of 27 June 2022, they were approaching $750.

The strength of technology shares has seen them become a larger and larger part of global indices. The S&P 500, for example, now has 27% in the technology sector. This doesn’t include Amazon, Alphabet (Google’s parent company) or Tesla, which are considered consumer or communications companies. As a result, technology is now a significant part of many investors’ portfolios.

Recently, big tech share prices have come down to earth with a bump

Since the start of 2022, the Nasdaq has lost more than 20%, with some of the bellwether technology names losing even more: the share price for Meta (Facebook) dropped from a peak of over $380 to a level as of 8 June 2022 of $196. Amazon has lost around one-third of its value while streaming service Netflix is down almost 70% from its previous peak.

Is this the end of the popular and enriching big tech stocks trade?

Certainly, there are cracks appearing for some of the major technology companies. Netflix has been a high-profile laggard, losing subscribers as competition among streaming services has accelerated. Privacy and data concerns have prompted investors to question the advertising-driven business models of groups such as Meta and Google, while shoppers have not converted to ecommerce with the vigour many expected in the wake of the pandemic.

There are also valuation considerations. As inflation rises, it is pushing interest rates higher. That means that the long-term cash flows offered by big tech companies are no longer as valuable as they were when interest rates were lower. Many of the technology giants were ‘priced for perfection’ and when the environment turned sour, investors were no longer willing to support these lofty valuations. The fact that technology companies form a significant part of the major indices also creates volatility as passive investors move money in and out.

Don’t write off technology just yet

Technology is still embedding itself in our lives in more and more ways: from cars to banking to healthcare. There are major structural trends, such as cloud adoption, digitisation or cyber security that are persistent and enduring. The value of cybercrime, for example is currently $6 trillion, with predictions that it will rise to $10.5 trillion by 2025. That puts it just behind the economies of the US and China in terms of size. There are plenty of companies seeing extraordinary growth in their earnings as companies and governments fight back against cyber criminals.

Technology is still an important sector in terms of ‘future-proofing’ your portfolio. It is likely to be faster growing than other sectors because new markets are being created all the time. Even though big tech companies have seen weakness, they are also investing significantly in next generation technologies, particularly artificial intelligence. Microsoft recently announced it would be buying Nuance, an AI healthcare specialist. Meta (Facebook) has also been investing heavily in AI as part of its move into the metaverse.

Investing in big tech companies has been easy over the past decade. Investors have simply had to buy a Nasdaq or S&P 500 tracker with chunky weightings in the ‘FANG’ names. It may not be as simple over the next decade. Many of the large technology companies that form a large part of these indices face challenges in their core businesses. While they have deep enough pockets to ensure they are on the right side of innovation, it may be naïve to expect the level of growth seen over the past decade.

Technology is a fast-moving sector and suits active management. There are several specialist investment trusts – Herald, Polar Capital Technology or Allianz Technology Trust, for example – which are run by experienced teams with strong links to Silicon Valley. While investors may make more money out of an individual company, this will also carry more risk. Technology can quickly become obsolete (remember Friends Reunited, Palm Pilots or Napster?) and it can be worth having an expert on your side.

Nevertheless, for those who prefer a cheap and liquid passive option, there is plenty of choice. There are generalist ETFs based on the Nasdaq or MSCI World Information Technology index, but also ETFs based on cybersecurity indices, or ETFs specialising in Digitalisation or Semiconductors. These allow investors to take positions in specific parts of the technology complex, which may be faster growing.

There are always periods when it is unfashionable and investors decide they don’t want to pay for the growth big tech stocks purport to offer. However, a portfolio would be incomplete without them. Technology is likely to continue to be among the most important sectors in the long term.

You can upgrade to serious investing with the Fineco platform. Access a broad range of options to invest and trade cost-effectively in big tech, through individual companies or collective funds, including trusts and ETFs.