HomeNewsroomThe downs and ups of the airline sector

The downs and ups of the airline sector 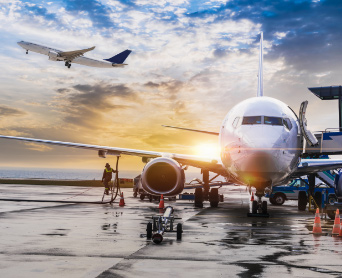 The airline sector has been hit first by environmental concerns and then Covid-19. Share prices have reflected the challenges airlines have faced as the crisis has unfolded.

The airline sector has experienced a disastrous few months. It has been in the eye of the storm of the Covid-19 outbreak as lockdowns and travel restrictions have seen revenues slump. Even as lockdowns have lifted, governments' ongoing restrictions on travel and quarantine rules, plus an understandable reluctance to travel while the virus continues to circulate have impeded the recovery.

The crisis came at an already-difficult time for the airline industry: although passenger numbers have been buoyant, the sector has been on the wrong side of the transition to low carbon energy use. Airlines' carbon dioxide emissions increased by 32% from 2013 to 2018, according to a study by the International Council on Clean Transportation.
It has been notably slower to decarbonise than other industries.
This has influenced the willingness of governments around the world to bail the sector out of its current crisis. Handing cash to polluting industries is incompatible with their commitments to reduce carbon emissions. Equally, as major investors such as insurance companies and pension funds adopt environmental criteria as part of their investment strategy, it has become harder for them to invest in airlines. This has put downward pressure on the sector.

However, this difficult period for airlines has presented opportunities for traders. It has been highly volatile, multiple factors have influenced the price and individual companies have shown markedly different fortunes.

As the Covid-19 crisis hit in late February and investors started to realise the likely impact on the aviation industry, share prices began to tumble. Investors keen to capture this trend could have looked at the most indebted airlines or the US Global Jets ETF. Other more diversified options might have included ETFs based on the MSCI World Transportation index.

The early falls were savage. The sector (as measured by the Global Jets ETF) lost around two-thirds of its value, moving from over $30 to $12. Almost all commercial airlines saw comparable falls, regardless of the relative strength of their underlying business.

On the face of it, this sell-off appeared justified. Widespread lockdowns had reduced commercial flying to almost zero. Even with lockdowns lifted, it seemed unlikely that commercial air travel would return to normal. Social distancing reduced the number of available seats on each plane. For many airlines, this decimated their business model in a stroke.

In reality, the picture was always more nuanced. Individual airlines varied in their access to capital markets and need for government bailouts. Some had immediate debt-refinancing needs and bond investors were more willing to support some airline groups than others. For example, United Airlines failed to get a $2.25bn debt offering secured on its older planes off the ground in May, while Boeing successfully raised $25bn in investment grade bonds shortly afterwards. Markets started to discriminate between individual companies.

There were other considerations: the share prices of airlines have always been influenced by energy prices. Fuel is a vast proportion of overall flying costs, so in theory, a lower oil price should have been good for business – if only airlines could take advantage. As the crisis began to abate, airlines were caught in geopolitical crossfire as Chinese officials banned US Airlines from flying between the two countries, swiftly followed by reciprocal measures from the White House.

More recently, airline shares have been sensitive to any sign of passenger numbers reviving and/or travel restrictions easing. In particular, stocks have shown some correlation to TSA (Transportation Security Administration) checkpoint numbers, which started to pick up in early June. They have also been a geared play on market recovery. The US Global Jets ETF doubled from the 15 May to 8 June, while the S&P 500 rose only 13% over the same period.

Short-selling has also played a role in the volatility of airlines' share prices, though it is difficult to know whether it is cause or effect. Taking Boeing as an example, there have been two notable spikes in short interest – in early April and early June. In both cases, a share price rally has coincided with a sharp reduction in short-selling. This may be because short-sellers started to realise momentum was going against them and moved quickly to cover their positions.

It's been a roller-coaster for the airline sector, but at various points it has created opportunities for long positions, short-selling and CFD trading. Volatility can be a trader's friend.

The Fineco trading platform lets you trade airline stocks for low fees and tight spreads, and with CFDs you can trade stocks at zero commission and no added fees, market spread only.

Study by the International Council on Clean Transportation: theguardian.com/business/; Global Jets ETF: fool.com/quote/nysemkt/us-global-jets-etf/jets/; United Airlines failed to get a $2.25bn debt offering secured on its older planes off the ground in May: cnbc.com; Boeing successfully raised $25bn in investment grade bonds shortly afterwards: ft.com; Measures from the White House: fool.com/investing/; TSA (Transportation Security Administration) checkpoint numbers, which started to pick up in early June: tsa.gov/coronavirus/passenger-throughput; The US Global Jets ETF doubled from the 15 May to 8 June: fool.com/quote/nysemkt/us-global-jets-etf/jets/, while the S&P 500 rose only 13% over the same period: marketwatch.com/investing/; Boeing as an example, there have been two notable spikes in short interest – in early April and early June: fintel.io/ss/us/ba