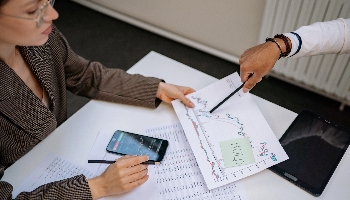 What does "liquidity" mean? What is "spread"? Discover the most common trading terms on Fineco Newsroom.

Trading terms like ‘risk on, risk off’, ‘mark to market accounting’ and ‘strike price’ may seem daunting at first. This short guide explains the meaning of some important trading terms and the role they can play. Trading has its own language which can be baffling at first but makes more sense once you get to grips with it. Understanding these key trading terms you may encounter as you build your strategy will help you on your way.

In/out of the money

Risk on/risk off – when markets are in ‘risk on’ mode, they are looking for higher risk trades, often because they see the risk of those trades as comparatively lower because they are optimistic about growth prospects. This might include upping exposure to areas such as emerging markets, smaller companies or economically sensitive sectors. ‘Risk off’ in contrast, sees things move more the opposite way and tends to happen when investors are pessimistic about the prospects for growth.

Carry – positive carry is the return you get from holding an asset. That might be income from a bond or dividends from equities. Negative carry is where it costs an investor to hold a specific asset. This might happen if an investor goes short on a fixed income asset, for example. Currency carry trades are widely used, where investors borrow low-yielding currencies and lend out high-yielding currencies.

Fill – a trade is considered to be ‘filled’ when it is complete. Often to ‘fill’ a trade, certain parameters will need to be met – a specific price needs to be hit, for example.

Liquidity – the liquidity of an asset refers to the ease with which it can be bought or sold without significantly influencing the market price. A lack of liquidity means there are fewer buyers and/or sellers, leaving investors to pay more to buy an asset, or sell at a price lower than they’d hoped.

Open/covered position - an open position is a trade that has been started, but not yet closed out with an opposing trade. An investor may buy 500 shares of a specific company. That position would be considered open until they sold the stock.

Roll - rolling a contract is a term most commonly used in futures trading. It means trading out of one contract and then buying the contract with next longest maturity. The alternative is to let the contract expire.

Strike price – meaning the price at which the holder of an option can buy (a call option) or sell (a put option) the underlying security when the option is exercised. It may also be referred to as the exercise price.

Tick – meaning the minimum amount of price fluctuation in a futures or options contract. Ticks will vary for different assets and are usually set by the exchange on which they trade. Tick sizes are designed to provide the best possible liquidity and lowest bid-offer spreads.

You can learn more about trading, investing and other financial terminology by visiting Fineco’s comprehensive glossary.