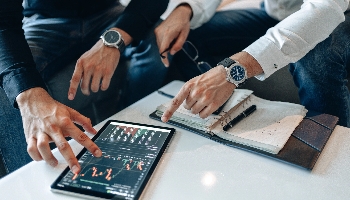 The first half of 2022 saw investors contend with the impact of rising global inflation and interest rates, slowing economic growth and volatile markets. But there are still new investment opportunities as some sectors perform better than others.

The start of 2022 came with some measure of optimism for investors: inflation may have been high, but economic growth was robust and the worst of the pandemic appeared to be over. Russia’s attack on Ukraine threw this benign scenario into disarray, with implications for agricultural and energy prices, global inflation and economic growth. There are, however, still investment opportunities.

Ukraine is a humanitarian crisis with global financial consequences

First and foremost, the Ukrainian conflict is a humanitarian crisis, which threatens to undermine Ukraine’s right to self-governance and puts its citizens in significant peril. However, it also has major geopolitical and economic consequences. Many companies can no longer operate as freely across the globe and must navigate greater restrictions on how and where they do business. It creates a further wedge between the US and China, who are on opposite sides of the conflict.

It also has significant implications for economic growth across the world. While neither Russia nor Ukraine is a major economy in its own right, each has considerable raw material wealth, including a large share of global energy exports, as well as exports of a range of metals, food staples and agricultural inputs.

KPMG outlines the problem in its latest economic outlook: “Russia is the world’s largest exporter of natural gas, second largest exporter of oil and the third largest of coal. It is also a large exporter of titanium, uranium, aluminium, copper, nickel, and palladium. Ukraine is a significant source of global neon exports and produces components that are part of highly integrated automotive manufacturing supply chains, among others.”

It points out that higher prices for energy and metals, coupled with delays in supply will hit industrial production, particularly in Europe. The EU relies on Russia for about a quarter of its energy needs and sources a number of its manufacturing components from Ukraine. The conflict puts pressure on already-strained global supply chains.

All of this has helped push up inflation across the globe. This has a knock-on effect for interest rates and consumer spending. It is destabilising the world just as it was getting back to normal after the worst of the pandemic.

In fact, the first half of 2022 has been characterised by accelerated inflation. Central banks have been forced to revise their forecasts faster and higher. In May the US annual inflation rate hit 8.6%, the highest since December 1981. This was largely driven by energy prices, which rose 34.6% in May, but food costs also surged 10.1%. In the UK, the Bank of England is now predicting that inflation could reach 11% over the coming months.

Central banks are treading a precarious path between letting inflation run out of control and pushing their economies into recession. In May, the US Federal Reserve announced it would raise the benchmark US interest rate by 0.5 percentage points to a target rate range of between 0.75% and 1%.  This was followed by a further 0.75 percentage points increase in June, raising the target range to 1.5% and 1.75%.

The Economist Intelligence Unit is predicting more US rate rises over 2022, with interest rates reaching around 3% in early 2023.

The Bank of England raised rates to 1.25% in June and markets are predicting these will be up to around 3% in a years’ time, while the European Central Bank has signalled it is likely to raise its benchmark deposit rate above zero in the second half of the year.

While central banks around the world are following the general trend, there are some emerging market outliers. Brazil has already raised its interest rates to over 13% and is further through the monetary policy cycle than other countries. China has been considering loosening credit availability by reducing interest rates as it tries to encourage economic growth.

It is decreasing disposable income and hurting the consumer economy. In its most recent Global Economic Outlook, the IMF said about the conflict in Ukraine: “The economic damage from the conflict will contribute to a significant slowdown in global growth in 2022 and add to inflation. Fuel and food prices have increased rapidly, hitting vulnerable populations in low-income countries hardest.”

Stagflation, where high inflation combines with low growth, is now a real possibility for many countries across the globe. The only bright spot has been employment. The UK now has more job vacancies than employed people for the first time since records began. The US is seeing similarly strong employment data. This may prevent an even worse economic scenario.

It has been a tough few months for markets

By the end of May, the MSCI World was down 12.8% for the year to date, while the MSCI Emerging Markets index was down 11.7%. However, some areas have been more difficult than others.

The biggest casualty of the recent market environment has been technology. Some of the major global technology companies have seen a significant hit to their earnings, which has hurt share prices. The sector has also been hit by higher interest rates and inflation, which have diminished the value of the companies’ long-term cash flows. This has caused investors to reassess the sector’s sky-high valuations.

What are the best stocks to invest in for the rest of 2022?

Where technology has tumbled, other areas have emerged. Energy stocks – both traditional and, to a lesser extent, renewables – have soared as oil, gas and electricity prices have risen. Equally, it has been a better time for ‘value’-focused areas, particularly dividend stocks. At a time of higher inflation, dividends today are more valuable than cash flows in the future.

Commodity-focused markets, such as Latin America have performed well over the six-month period too. Traditionally inflation-proof areas, such as infrastructure and commercial property, have also been a relatively safe shelter for investors.

The Fineco platform can help you work out the best investment opportunities for you with low prices and no hidden fees.