HomeNewsroomIs it better to buy in a bull or bear market?

Is it better to buy in a bull or bear market? 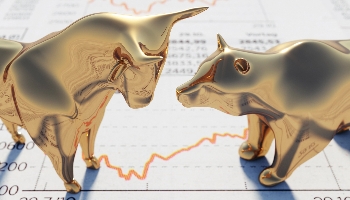 What is the difference between a bull and a bear market? Learn more about the two types of markets on Fineco's Newsroom.

In the financial sector, we often hear “bull and bear markets”, terms used to indicate trends and identify the market’s upward and downward phases. Although it’s a simple concept, in actuality these conditions are determined by very complicated factors.

For an investor, understanding the direction of the market is essential - a strength that influences financial decisions and involves risks and opportunities that must be analysed with particular care. Here are the differences between bull and bear markets, with some tips for understanding which phase is the best to invest in.

What are bull and bear markets?

In fact, the terms bear and bull are used to indicate the trends in the stock market, a single stock or in a given sector. Similarly, you can use these expressions to indicate downwards or upwards trends in cryptocurrency, Forex, commodities or any sector and financial instrument.

Overall, the terms bear and bull describe the market sentiment, or rather the investors’ general attitude that is determining a positive or negative phase for the market, a sector or an asset. It’s a quick way to describe the financial market which is used by investors to communicate and swap opinions on the market conditions during a specific time period.

Why is it called bull and bear markets?

The origin of the terms “bull and bear markets” is tied to the imagery that these two animals evoke. However, it’s still not clear how they entered the financial sector; in fact, the precise origin of these two expressions is unknown, although there are plenty of explanations on the meaning of the words bear and bull when applied to investments.

The first explanation links the terms bear and bull to the ways in which these animals attack. Namely, a bear tends to get low and launch its attack from down low, using its claws to hit its opponent with downwards movements, replicating a potential downward trend. At the same time, a bull uses its horns to launch its attack in an upward motion, similar to how market prices rise.

The second explanation traces the term back to the sale of bear pelts, an activity that in the past saw certain brokers selling pelts before they had even received them from the hunters. In this way, they speculated on the price of the pelts, hoping to purchase them at a lower cost in order to earn more if the market price were to go down.

Bears and bulls were also used in combat around the eighteenth century, therefore as they were considered to be two opposing animals, the term bull was adopted as the bear’s adversary. The two opposing symbols used by two stock exchanges are interesting, the iconic Wall Street bull statue by Arturo di Modica and the bear situated at the Frankfurt Stock Exchange.

In any case, today, downward trending markets are labelled as bear, with investors speculating on downtrends and technical signs pointing to it being called bearish. On the contrary, upward trending markets are labelled as bull, therefore the technical signs indicating growth and investors that only operate during upturn phases are called bullish.

Is a bear market good or bad?

In general, people tend to think that a bull market is better than a bear market, in the sense that when share prices rise, it is easier to invest and earn with fewer risks. Obviously, analysing the market’s phases is more complex; in fact, an upward trend could hide more pitfalls compared to a downward trend and vice versa.

Even in a bear market, not all shares will decline in the same way, but certain assets could still continue to grow by moving against the trend. Obviously, it is harder to invest in a downward trending market, as the systemic risks are higher. Therefore, it is essential to pay attention to financial analysis and correct risk management, evaluating in-depth the macroeconomic picture.

Is it better to buy in a bull or bear market?

There is no single answer to this question; in fact, for some investors at certain periods of time it could be cheaper to invest in a bull market, whereas in other situations a bear market could be better. When the market grows so do prices, so buying shares in stock becomes more costly for an investor due to lower general risk.

On the contrary, when the market declines, prices tend to go down as well, so purchasing shares becomes cheaper; however, there is a risk that the asset value will continue to decrease and not be able to go back up. In this context, the investor’s psychology plays a fundamental role as they try not to be influenced by the market sentiment and always use a planned investment strategy.

To make informed decisions it is essential to start with a technical analysis, studying in depth the markets and the conditions that have determined the bull or bear tendency. Both can offer investment opportunities but you must always protect capital and invest conservatively with the right approach to money and risk management.