The potential impact of the 15% global minimum corporate tax rate 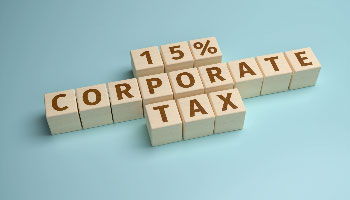 While a global minimum rate of corporate tax has long been in discussion, most major countries are now on board. It’s intended to make sure global companies, tech companies in particular, pay their way. But there are concerns smaller economies may suffer.

New rules on minimum corporation tax came a step closer to fruition in October 2021 as Ireland agreed to waive its cherished 12.5% rate. The move is likely to cost the Irish Government around €2bn in lost revenues, but it paves the way for agreement among members of the Organisation for Economic Cooperation and Development (OECD) for a 15% global minimum tax rate.

Putting an end to ‘shopping around’ for favourable tax rates

Higher minimum corporate tax rates are designed to prevent global companies ‘shopping around’ for the most favourable tax territory. It’s particularly aimed at US technology giants such as Amazon and Facebook, which have been able to engineer low rates of tax relative to their vast revenues and profits by moving to low tax jurisdictions.

For Ireland, low tax rates had been the cornerstone of its economic development strategy and its agreement is symbolic. However, the Government won a number of concessions, including persuading the OECD to set aside its commitment to a global tax rate of “at least 15%” and to allow lower rates for smaller, domestic companies with turnover of less than €750m.

Almost 140 countries have now agreed to enforce the global minimum corporate tax rate, plus a fairer system of taxing profits where they are earned. The OECD has said the deal could bring in an extra $150bn (£108bn) of tax a year, providing a war-chest for governments to speed recovery from the impact of Covid-19.

Certainly, there is plenty of evidence that global corporations have not been paying their fair share. For example, Amazon made sales of €44bn in Europe in 2020, but paid no corporation tax in Luxembourg, where it is based. In 2019, Google paid the French Government almost €1bn to settle a long-running dispute over its taxes.

The pandemic has made the tax schemes employed by global technology companies look more unfair. As other industries have struggled and governments have been forced to spend heavily to support their citizens and key industries, the technology giants have benefited significantly from the move to remote working, online learning and e-commerce. This has increased the clamour for them to pay their way.

International agreements take a long time to come to fruition

The rules on global minimum corporate tax levels have been in the pipeline for more than a decade. However, it does appear that the OECD is close to a deal and an announcement could be made before the end of 2021.

If all goes ahead as planned, the new rules are likely to commit signatories to the implementation of tax reforms by 2023. The two-pillar reforms would give countries a new right to tax the profits of global companies based on sales made within their borders. This is designed to address the problem of companies making sales in one jurisdiction and declaring them in another (lower tax) jurisdiction. This has been a particular problem in taxing technology companies when it’s often not clear where a sale is made. The second pillar is the global minimum tax rate of 15% on large companies.

The reforms may only hit 100 or so global firms and there may be exemptions carved out for banks and natural resources companies. The charity Oxfam pointed out that the corporate tax rate in industrialised countries averages at 23.5%, saying the 15% rate "let big offenders...off the hook".

Perhaps more importantly, there is also criticism that the reforms disproportionately benefit the wealthiest countries, where the technology giants make the majority of their sales. It may stymie the growth of smaller countries trying to attract businesses and inward investment. It is notable that the few countries holding out on the agreement are smaller economies such as Kenya, Nigeria, Pakistan and Sri Lanka.

The impact for investors is likely to be minimal, but it is a new direction of travel

It is not yet clear whether the new rules will succeed in their ambition to get companies to pay more tax. Amazon, for example, has kept its tax bill low by carrying forward past losses. This is unlikely to be affected by the new tax rules. In practice, raising a company’s tax bill from, for example, 12.5% to 15% is unlikely to make a material difference for shareholders.

That said, the technology giants appear to recognise that they need to pay more tax. Nick Clegg, Facebook’s vice president for global affairs, said: “We recognise this could mean paying more tax, and in different places. The tax system needs to command public confidence, while giving certainty and stability to businesses. We are pleased to see an emerging international consensus."

There may be flaws and compromises in the new agreement. Nevertheless, it is likely to spell the end of an era where digital businesses gravitate to low-tax jurisdictions to avoid paying tax.

Whatever your own view on the potential impact of a global corporate minimum tax rate, Fineco platform offers the tools and investment options to help you adjust your trading and investment strategy accordingly.