HomeNewsroom10 best trading indicators to use

10 best trading indicators to use 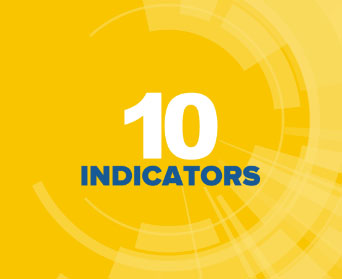 The analyses investors use to increase their chances of success fall into two main categories:

Fundamental analysis focuses on underlying performance, digging into companies' financial statements and other aspects of their business. This sort of analysis tends to be more favoured by investors that hold stocks for longer periods of time.

On the other hand, the technical analysis examines the price movements of a security and bases trading decisions on that data. This approach relies on trading indicators, which are mathematical analyses of trends and momentum. Here are the best trading indicators to use to help predict future price scenarios and profit from trades.

This indicator smooths out major spikes or dips in stock prices so traders can more clearly see price trends. It is calculated by taking the average security price during a number of time units (usually days), adding the averages together and dividing by the number of time units. Twelve or twenty-six days are commonly used to generate SMAs. This indicator is a lagging indicator because it is based on past price trends, which forms the basis for other indicators.

This indicator is similar to the SMA, but it gives more weight in its formula to recent data. This means it is more responsive to new developments and is one of the best trading indicators for shorter-term traders.

This indicator is also based on moving averages and charts a standard deviation (a measure of the security’s volatility) above and below the real price. These bands can tell a trader when security is overbought or oversold.

This indicator is calculated by dividing the highest and lowest price points during a given time period into a set of ratios that follow Fibonacci numbers, a reoccurring pattern in nature. These ratios show points at which a security’s price momentum is more likely to change, known as support or resistance levels.

Unlike the previous four indicators, which are plotted on the same chart as the security price, the RSI is plotted on a graph with a scale from 1 to 100 (making it part of a group of indicators called oscillators). The RSI is a score based on the magnitude of price movements that tells you whether a security is overbought (score above 70) or oversold (score below 30).

This indicator, like the RSI, is displayed on a scale of 1 to 100. It shows the current price compared to a range of prices over time. Like the RSI, it can be used to determine whether a market is overbought (over 80) or oversold (under 20).

This indicator gives trader’s insight into the trend direction of a market, as well as its momentum. It consists of one line that shows the difference between two moving averages, a signal line that can be used to decide when it is the best time to buy or sell (depending on when it crosses the moving averages line), and a histogram.

As its name suggests, this indicator measures changes in volume rather than price. The theory behind it is that when volume increases brusquely, it is usually a signal of an impending price movement. It shows whether the volume is pouring into or out of an asset and can be used to gauge client sentiment.

This index is a lagging indicator that shows the strength of a trend. ADX itself indicate the direction of the trend, but this information is given by the positive or negative directional indicator that is usually plotted along with the ADX. It helps traders decide whether to take long or short positions, or no position at all.

This indicator is used to measure trend strength and trend changes. It has an up-line and a down-line, which measure the number of periods (usually days) since the last high and last low. When the lines cross, this signals a trend change.

The best trading indicators to use will depend on your specific trading plan, as the best indicators for day trading, for example, will be different from indicators for other styles. Most successful traders rely on a combination of technical indicators to deploy their strategy rather than just focusing on one chart. This variety of inputs can give a trader a more comprehensive picture of a market’s past behaviour and direction.